Second Skin Goes To SXSW
With great excitement, the guys at Pure West Media announced the launched of the trailer for Second Skin. That was soon followed by the announcement that the movie had been picked for the South by Southwest Film Festival in Austin, Texas. Not only that but it was picked for opening night! Victor, the producer posted this on his blog about SXSW: How long have we all been waiting to hear this news? Some of you blog readers have been waiting patiently with us for a long time

Well, here it is, finally- Second Skin is going to SXSW!!!

We dont have an official release date, though the president said that were currently scheduled for OPENING NIGHT!

What is Second Skin? Again, borrow from the Second Skin site the official definition is: Second Skin takes an intimate look at computer gamers whose lives have been transformed by the emerging genre of Massively Multiplayer Online games (MMOs). World of Warcraft, Second Life, and Everquest allow millions of users to simultaneously interact in virtual spaces. Second Skin introduces us to couples who have fallen in love without meeting, disabled players who have found new purpose, addicts, Chinese gold-farming sweatshop workers, wealthy online entrepreneurs and legendary guild leaders - all living in a world that doesn't quite exist.

Where do we fit in? We are the Legendary Guild they filmed for the movie. Attending one of our Lan Parties.. our Dinners.. our 2007 Annual Conference.. filming Dragons at his house and doing a huge number of 1 on 1 interviews, they were thrilled with the footage they obtained from the guild and have The Syndicate prominently in the movie. We are extremely proud to be supporting the movie and to be featured in it. We're going to Austin Baby!

You can see the movie trailer at www.secondskinfilm.com We are mentioned in it abot 20-25 seconds into the trailer. 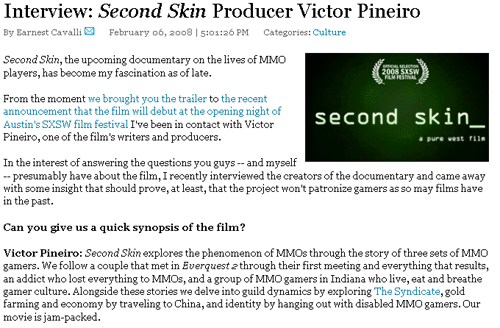