2003 Syndicate World Conference
One Aug 14th through Aug 18th, The Syndicate gathered in Orlando, Florida for our 2nd annual Syndicate World Conference. Members from all over the US as well as Canada and Germany were in attendance. Some flew.. some drove.. one even took the bus. Some were stuck for hours as a blackout gripped the northeastern US and areas of Canada but still they pushed onward and made it to Orlando.

Over 100 people were in attendance at this year's conference event. The Rosen Plaza in Orlando was very accomodating of our late night partying and even put a number of members in very large suite rooms near the guild suite giving us more room to spread out.

The main focus, besides getting to know each other better and relaxing, was to discuss the migration to future games. UO and EQ are nearing the end of their lifecycles while other new games are soon to be released and look promising. How best to move from UO and EQ into a new world was a major topic for discussion.

Saturday held a guild meeting where options were discussed and plans made. Presentations on possible future choices took place. Since The Syndicate received special invitations to be involved early in the beta testing of several games, members were able to explore those first hand. In addition a special video prepared solely for The Syndicate was shown which showed off their development area and some in game things under development.

A large dinner event was held at the Medieval Times restaurant. Given the "royal treatment", The Syndicate was treated very well and our knight won the evening and defeated the evil forces. Dragons, the guildmaster, was even knighted by the "king" in a special ceremony. We happened to stumble across another online gaming guild from EQ that had nearly their entire guild there (7 people) and when 90+ Syndies who attended the dinner stormed past them I think they needed fresh underwear. The Green Knight had the unfortunate distinction to be the nearest enemy knight to us and he chose to insult someones sister. That earned him rousing choruses of "You Are Suck" (which were soon echoed by others in the arena who had no idea what it really meant or where it came from).

The 2003 Conference was a huge success. We grew stronger as a guild and began mapping out our future plans. The 2004 conference is already being eagerly anticipated.

The Conference Chicken
If you happened to be there, you will know all about The chicken. If you werent there, the story goes something like this: On the way to hooters on Thursday, a lady walked by with this rubber chicken that when you squeezed it, it screamed in a really loud and annoying way. After several drinks, that chicken became pretty funny so one was located and purchased at a nearby shop. After scaring the living crap out of the 40 or so people in the suite room who were checking in, the chicken began to pop up all over the conference randomly screaming at people and offering insite into conversations.

At some point, The Chicken was kidnapped. It turns out Aveen stole it. And here is her story: Trelisha and I decided to kidnap the chicken. D was just sitting there with his back to us, so we had Kryl sneakely grab it and we ran out of the room with it.

Then we weren't really sure what to do with it, so we took it to my room, it was closer and I wasn't sharing a room so only the two of us knew where it was. We bound and gagged poor TS and wrote a ransom note. Hepl me! D may still have the note, but in effect it said" If you want to see the chicken alive again call the concierge desk and sing "momma's little baby loves shortening, shortening..."

I don't think he did it.

While locked in my room, The Chicken tried to get the attention of people down below and he tried to escape out the window. HEPL ME! But chickens don't have oposible thumbs so he stayed in my room.

The Chicken did manage to call D and ask for "hepl". Hepl Me! But I cought him before he could give away his location or who done it! 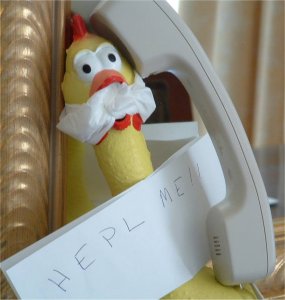 Well, for that I decided it was time to up the anti,and a chicken dinner sounded kinda good. So I preped the chicken to be hung. Hepl me?

I got all the way up to stringing him up. I let him have his last words . And I took one last look at his eyes , and I just couldn't do it. I'm not a monster, I couldn't kill a hepl'less chicken.

So I had the people at Medevial Times do it. But I trussed TS for roasting. At Medevial Times they started to sever dinner and gave D the usual course. But then he got that taken away and the great folks there served TS on a nice covered platter surrounded by grapes. Back in Dwagons hands. Apparently TS tried to hit me with the grapes, but he's not a very good aim and hit other people instead.

The next morning, I found TS hiding in a tree in the suite, so I took him home. My guess is that maybe D choked him a little too hard .

He had fun hiding in my bag but he got out to streach his legs at the airport and sat next to the American Airlines sign.

We were both too tired on our flights home so we just slept. He stayed in the bag and only squaked once when I accidentaly stepped on him.

Since then has been to several national observatories and even the Hatch Chili Festival. That chicken gets around. He is competing with Dargbot. Unfortunately for the Chicken, Dargbot has ridden in an F22 and an F15 fighter jet. It has gone parachuting with the US Army. Its having a picture/handshake arranged with the President. So the chicken has a ways to go since Dargbot is da man!