SWTOR Goes Live
Officially it was Dec 20th 2011 that SWTOR went live but those who bought the game early (which included over 100 Syndicate members) got in on Dec 13th. The Syndicate had a large SWTOR presence. With over 300 of our members chosing to particiate we setup an Empire side guild on their website which was imported into the game at launch. The Syndicate also put a legal agreement in place with EA to protect our Trademark so other groups seeking to impersonate us were renamed as they popped up.

In addition to supporting our friends at Bioware through playing SWTOR, we also wrote the SWTOR Atlas for Prima Games. There were two aspects to the guide. The first was the printed Atlas that could be bought off Amazon, PrimaGames and other sites. It was over 300 pages of maps of the planets and major buildings that was changing up until just hours before it went to print due to things in the game changing up until the last minute. The second was the digital product which was based off of the Prima website. We submitted content such as Class Guides, Crafting Guides and Flashpoint maps for that product but those were never included. One of the downsides to the SWTOR guide was that it signaled the end to our Prima relationship. They gambled a great deal on the SWTOR guide being a huge success but the plethora of online sources for information that were Free and Community Managed erroded the market for strategy guides within the online gaming space. Online gaming players already were pre-disposed towards finding data online and didn't need to or want to spend money on a paper guide that was quickly out of date. We were very pleased with our SWTOR work but understand why future Prima guide work was not going to occur. They needed to focus in other areas to be successful with the small profit margins that existed.

Work on the strategy guide started 8 months before launch so by the time SWTOR went live, we were already experts at the game. The Syndicate surged into the Star Wars universe with an excitement that hadn't been seen since the launch of WoW some years before. 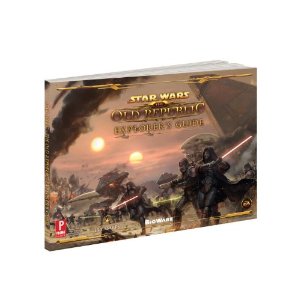