When we joined New World it was after much play testing and submitting detailed reports to the New World team on what was right and what was wrong. There were very clearly things wrong with the game that would not keep a large audience long term. We predicted that within 3-6 months, the game would take a massive hit to its playerbase and keep declining from there without a massive surge in end-game content and a correction to (or addition to) a number of core systems. As we have shown many times over our 26 years, if a game has wide appeal to The Syndicate members, it will be a strong contender in the marketplace and usually do very well. If The Syndicate tells you that there are serious flaws, the game is very likely to implode. That absolutely happened with New World when our feedback was largely discounted in favor of either getting the game out the door or perhaps the fanboi comments. The results are very clear. The massive server consolidation before 3 months had passed.. and the insane drop-off in player count by the start of Month #5. Here is the Steam Charts look from the start of February 2022: 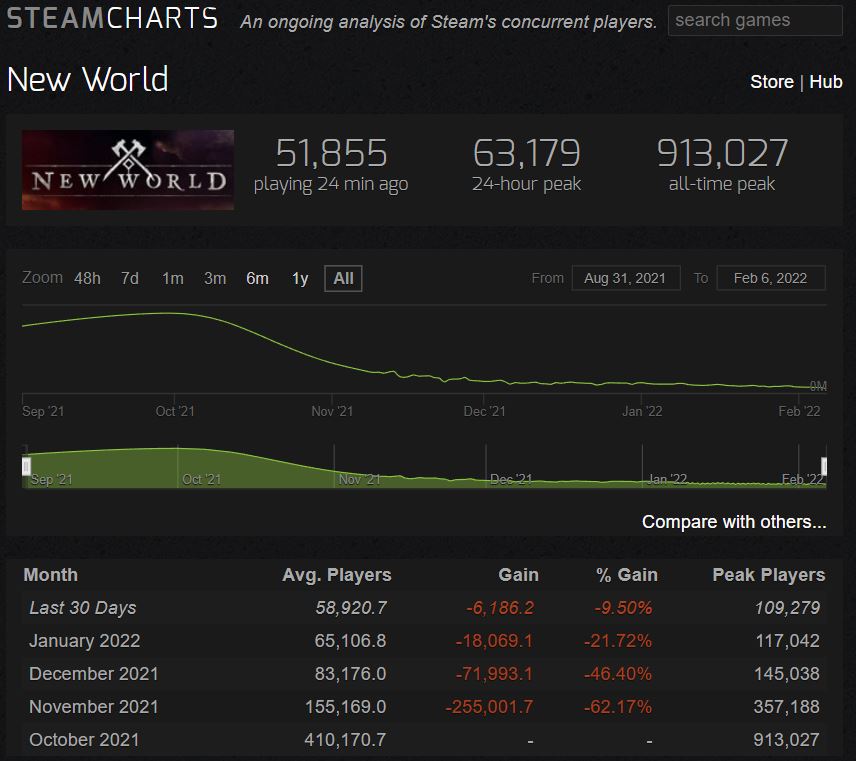 The numbers speak for themselves. A peak of 913,000 around launch and by the start of Feb, the peak was 63,179. Only 7% of the players remain or, said another way, 93% of players had left. The average players online count is down to only 14% of what it was at launch. That said, The Syndicate maintains an active and strong presence in the game far longer than we first guessed. For us, the secret sauce was our community. The flaws of the game were compensated for by our desire to play together as a team. As such, a number of folks, passionate about being Syndicate members and being a team, have overcome the game limitations, found their 'fun' and play together regularly. Unforunately the same cannot be said for 93% of the rest of the community. We had very high hopes for New World, and hope is not lost (yet), but it is a lesson in: If you engage The Syndicate for testing and feedback, the final report is a reflection of what the overall gaming community is going to think and feel. The Syndicate is a very diverse group of gamers from all walks of life and backgrounds. If the game widely appeals to us, then you have a hit. If we tell you there are core flaws, addressing them is a key for long term success.