Early Days Of Faction Warfare
At the end of 2000, OSI added in a new feature they called Faction Warfare. The concept was that 4 sides (True Brits [TB], Minax, Council of Mages [COM] and the Shadowlords [SL]) would each have a base and the ability to "capture" 8 towns in Felucca by fighting over and guarding small round things called Sigils. You had to corrupt them for 24 hours and then you owned the town for 3 days. Then it started all over. Owning a town really didnt get you much except knowing you did it but everyone dived in with a gusto since it was new and different.

The Syndicate, using our TSG warstone, fielded 30-35 fighters, 10+ thieves, several tamers and several merchants. Initially we join COM. They had a very poor base but under our in game leadership and through our efforts we kept 6 towns!!! Quite an accomplishment. Then Urza of EB, who was the faction commander claimed credit for the whole affair. Things went downhill from there with COMs killing members who accidently went grey. COM members smack talked Syndicate members and it became very obvious we were in a faction full of X-pks, kiddies and whiners. There were some good people, of course, but a whole lot of the other kind.

About this time the TB faction invited us to join them. We looked closely and our friends and allies were in TB and they certainly had a good base and alot of heart when it came to defense. We gave it a shot and resigned from COM. But a bug struck us and MANY other players and we couldnt join TB for 14+ days. That was a very boring time for us and a very low time for TB who lost all the towns they controlled.

OSI got the bug fixed and soon we had 45+ people on the warstone fighting factions. Stealing the sigils and defending them heavily, TB soon owned 7 of the 8 towns and was back in action. Its alot easier to work with good, nice people who are friendly than it is to work with the opposite. TB, at that point, seemed to work well together and is doing very well.

Faction warfare continues and im sure more reports in our history will be forthcoming about it. COM was caught using bugs to kill guards. EB thought they could somehow "hurt" us by pkilling some members in the island base. And the war of words over blue, non faction people in bases, rages on until OSI fixes it.

Here is a picture of one base defense we were one when we kept 7 sigils. 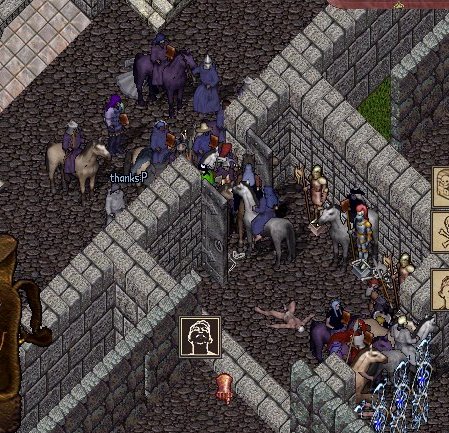