Alterego.Net
October 2005
The Alterego project kicked off in 2005. They were looking for a juggernaut sized guild to be part of the project and they needed to look no further than The Syndicate. There are very few guilds out there even close to our size.. none that have ever gathered 120+ members in one spot at one time. And none as old and as organized as we are. So were a good fit for what they were looking for and very glad to help.

Their site defines the project as: ...the world's first project to document global gamer culture in words and pictures. From Asia, Europe, Australia and the US, photojournalist Robbie Cooper and writer Tracy Spaight will be travelling around the world recording interviews with, and shooting pictures of, the most colorful, interesting, or significant gamers around the globe.

The Syndicate was happy to participate in this project. Robbie, the photographer, came to our 2005 World Conference and took a massive group picture for the photo exposition that will tour the world and for the website. In a followup to that an interview was done about The Syndicate. The photos and Q&A became part of a world tour exhibition stopping in many major cities and viewed by thousands. Here is a snapshot of the picture taken in Myrtle Beach, married with a picture of the guild from WoW: 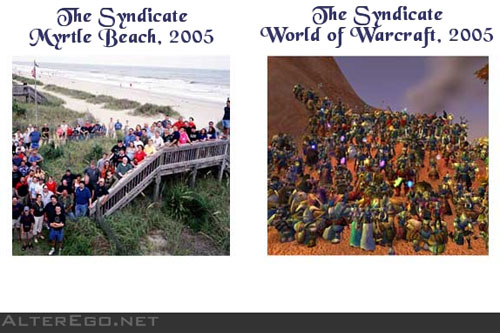