In Feb 2007, The Syndicate celebrated a 11 years of thriving success as a guild. What was life like in 1996 when we were founded? Here are a few things to give you some perspective:

* Saddam Hussein attacked a Kurdish enclave in Northern Iraq. The United States issues a warning, and then attacks the southern air defenses of Iraq.
* The album by Alanis Morisette, Jagged Little Pill won a Grammy award.
* 2 civilian US planes flew too close to Cuba and were shot down.
* The Unabomber, Ted Kaczynski, was arrested after eluding the FBI for nearly 17 years. His brother tipped off the FBI and Mr. Kaczynski ultimately ended up receiving 30 years in prison.
* The Dallas Cowboys beat the Pittsburgh Steelers (27-17) in the Superbowl. The New York Yankees beat the Atlanta Braves in the World Series (4-2). Chicago beat Seattle in the NBA Championship (4 games to 2). Colorado beat Florida in the Stanley Cup (4 games to 0)
* Janet Jackson signed an 80 million-dollar deal with Virgin records to become the highest paid musician in history.
* Scientists analyzing a Martian meteorite claim that it may provide evidence for the existence of ancient life on Mars.
* Dr. Ian Wilmut and his team clone the world's first sheep from adult cells. They named the sheep Dolly.

In terms of computing power the differences between then and now are monstrous. There were no such thing as DvDs (they were still 2 years from being invented). Right about the time we were formed, ONE Gigabyte harddisks came on the market. The most common monitor size was 13" and a super sized one was 15". Your CPU, at best, was 150MHZ which would have just come out the month before we formed and if you were very lucky, you had 32MB of RAM but most had 16-24MB.

The world The Syndicate was founded in barely resembles the world that we thrive in today. Today we are doing things that weren't even conceived or thought about back in those days. But... we are doing them VERY VERY well where more than 1.6million guilds have risen and fallen since we were first formed. None of them formed with the idea they would fail. Many of them formed wanting to be the biggest, baddest, oldest, most successful guild there ever was. But they all share one thing in common... they failed. Most of them never became more than a whisper drowned out by the roar of an ocean full of whispers. A few of them broke the surface of the ocean and made some waves. A couple even made a big enough wave to surf on for a short time. But in the end, they all failed. Even the waves some people were surfing on came crashing down sooner or later tossing their riders back into the ocean searching for the next wave. The Syndicate somehow defied the odds and not only survived, but thrived. To continue the same analogy, we would be like an island upon that vast MMORPG ocean of guilds and players. The occasional storm comes by which we weather just fine. We are always there. We are always growing and advancing. Other groups may crash upon our shores and burn out but we continue strong for years to come.

Upon our island you might find...
* Camera crews filming us for a documentary about online gaming
* A publisher hard at work editing a novel all about you and our success
* An office for Prima Games working with members to create Strategy Guides to benefit all of the gaming world through your expert content.
* A Trademark Enforcement office working to ensure our name, that we have fought hard to develop into the juggernaut that it is, remains protected
* Embassies from many different "Game Development" countries that regularly post offerings to members to help them improve, balance, test or design their games
* Reporters hustling about interviewing and researching for that next interview about The Syndicate (50+ of them have been written about us over the last 11 years)
* Hundreds of members who have been residents of the island for 1 to 11 years. You will see boats arriving with new team members every so often but you will very rarely see a boat leave with anyone. Once here, nearly all members remain but it is challenging to get here and most that try, dont make it. You would see doctors and lawyers.. politicians and housewives.. IT techies and game developers.. military personnel and much much more.
* A really cool pair of guild stores selling Syndicate shirts, posters, mugs and other things. One is called Cafepress and one is called Zazzle
* A very active bar with the name of "Syndhall" where several hundred members go to every day to catch up on what is going on around the island and to share their own stories and information.
* A little robot, affectionately called Dargbot, that will beat you with his baseball bat if you step out of line.
* There is always a party going on.. always a returned smile when one is given.. always someone to help you out.. always a friend to hang out and talk with.

Our Syndicate island... in the middle of the vast ocean of online gaming.. truly is a world of its own.. different, better and more successful than anything else out there. YOU have played a part in making that happen so this anniversary is as much about saying THANK YOU to you as it is about celebrating our achievement as a guild. So thank you!

As part of celebrating our 11th Anniversary, we wanted to unveil a new Syndicate piece of artwork. This artwork definitely has a World of Warcraft feel to it. No artwork so far has had a WoW focus so we felt it was time to make one more specific to that very active and important aspect of our guild. 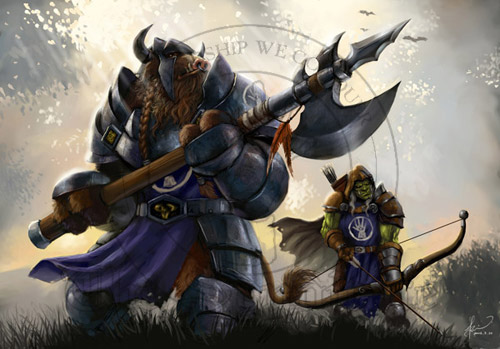