The Syndicate® is the most successful Virtual Community in the history of Online Gaming. With its initial roots and founding back to 1992 in AOL's Neverwinter Nights, those initial years were a mission of defining what a guild should be and what a long term success path could look like. Few, if anyone, knew where gaming and guilds might lead to and there was more bluster and bravado than substance and vision in those earliest of days. The current name, values and mission were adopted and established in early 1996.

We specialize in Gaming hardware feedback, Game & System Testing, Strategy Guide Writing, Consulting On Systems Design and Round Table Feedback. We are a very well organized, professional, mature organization that has been involved with MMO projects for many years. The quality of our work and our ability to deliver on time and maintain the secrecy of the projects we are currently working on is one of our hallmarks.

In addition to Game Development focus, we have a strong focus on growing our community, building friendships and in making the online gaming community better for all gamers. We regularly provide free feedback and testing to our developer friends to help create better "next gen" gaming content. Our engagements range from casual to very formalized and are a way for us to provide free support for game developers that leverages our passion for gaming and years of experience to make games better for all players. We have virtually no turnover so we maintain a high degree of institutional knowledge that we can roll forward from project to project.

By the time most MMORPGs launch, The Syndicate has been playing them for months (and in some cases a year or more) as part of one of our engagements. We usually maintain an "outpost" within those games of current Syndicate members while the bulk of the guild moves onto our next major project. We do not add new members for games we only maintain an outpost in. We have actively played just about every game including, but not limited to: EQ & EQ2, SOTA, Warhammer, Crowfall, Conan, LOTRO, DCUO, Rift, SWTOR, Aion, DDO, Wizard 101, Runescape, DAOC, Eve Online, Shadowbane, Tabula Rasa, Planetside and PoTBS just to name a few. Syndicate outposts cover the landscape of MMORPGs. We only actively recruit new members for our presences in three major MMOs which are the worlds of Ultima Online, World of Warcraft and New World. We downsized our WoW presence going from over 500 active members (with 2,000+ characters) to around 200 active members in 2011. Our UO presence is currently around 200 active members. Our New World presence is also around 200 active members. There are ~100 members participating in our D&D campaigns. There are around 500 active members participating in our consulting, testing and guide writing teams. You can get more details in our Syndicate Extended Game Support (S.E.G.S.) section of this site which are games that we actively play but from which we do not recruit new members.

The Syndicate is always looking at future "major game" expansion opportunities. Currently on our horizon are the following games that we are excited about:
Star Citizen
Ashes of Creation


The Syndicate isn't a guild, we are the industry leaders in gaming excellence and the most successful virtual community in the history of online gaming. We are not a MMO entity. We are a community of people who have a shared hobby of playing games. We use that shared hobby as a way to grow and build friendships that last decades. And we can say "decades" because we have been around far long than anyone else... with almost no turnover... with no internal drama... and operating as a single, unified, team of friends.

There is far more to share about The Syndicate and what we stand for. Come in and explore our site. Read about our rich history, browse articles written about us, check out our Charter and FAQ to learn what makes us tick, read about the games we are a part of and much more. Step inside, for The Legend of The Syndicate awaits.. 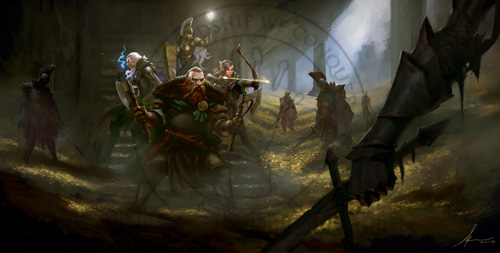 It has become almost an expectation that every year we will have a new anniversary and certainly 2022 is no exception. Reaching the 26th anniversary milestone is another huge achievement for The Syndicate. We know over 110,000,000 other gaming communities have risen and fallen, where billions of members tried and failed to create what The Syndicate has succeeded in building. We believe the number to actually be much higher at over 250,000,000 gaming guilds. Regardless, players tend to use guilds as toons to achieve a goal within a game, but those founding the guilds tend to believe theirs is 'the' idea... 'the' community... 'the secret sauce'... that will last for years to come and bring them some sort of legendary status. Few people found a guild and think "I am making this to fail in a few months". But the reality is, almost every one of them will fail between 6 months and 2 years. Almost no one ever reaches 10 years.. much less 26 years. A guild that was founded in 2022, that wanted to reach the same level of achievement, would need until 2048 to equal what The Syndicate has achieved in longevity, so far. That wouldn't even begin to layer on the game developer engagements, computer hardware manufacturer teams we are on, charitable contributions we have made and so much more. Our 26th anniversary is very special to us and an achievement very few players will experience. We do not blast it around the internet but we are very proud of reaching that milestone with the hope of many more in the future.

The 20th annual SyndCon event took place in Myrtle Beach in August of 2021. With Covid-19 still a factor it was a different kind of year. Vaccine was the main difference over 2019 with nearly every attendee being vaccinated. Taking place at a beach with a large number of outdoor activities, such as the annual picnic and guild meeting taking place at the beach, was a benefit. Members from all over the US attended but with borders mostly closed, our international members had to sit this one out.