Lotteries
With 1999 drawing to a close and 2000 dawning, Venusada (SL for our merchant squad) came up with the idea to host a weekly Lottery on AD for a fun guild event. The lottery would be open to all players who could come and behave themselves and would be free of charge. Names would be randomly drawn and prizes given out to the winners.

Lotteries were fairly easy to setup, attracted large crowds and would increase the visibility of AD and the customers to it. In addition, since many prizes of great value (like weapons of vanquishing, power, silver and force, portraits, armor etc..) were given out to many people, the players who came were benefited as well.

By Jan. 2000, 4 lotteries had been held on a nearly weekly basis with many more planned. On average 120+ people would show up for them and a system had been worked out to get prizes to the winners and make things run as smoothly as possible. Many Syndicate members are involved in running them now and without them Lotteries wouldnt be possible. Open to the public, Lotteries have proved a huge hit on Atlantic shard.

Here is a picture of a typical lottery turnout. 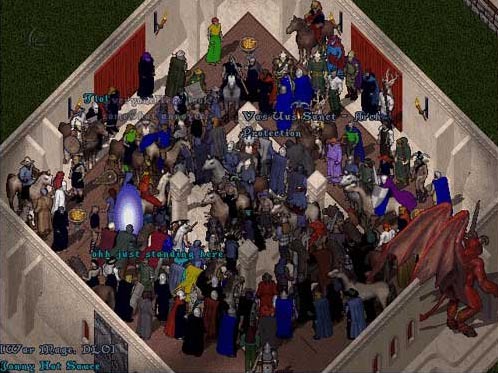