E3 2006
In 2006, we were privileged to receive an invitation to attend the E3 Expo from our friends at Perpetual They selected one guild (The Syndicate®) and 4 news sites to attend E3. They flew us out there and put us up at the New Otani hotel in downtown LA and provided passes to the conference. The conference took place at the LA Convention center. 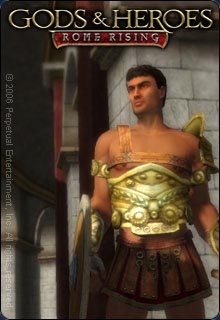 In the south hall, literally right as you enter one of the two sets of doors, was the Sony booth. Dominating the front area of the Sony booth was the Gods and Heroes game which Perpetual is making. We found the game to be very visually stunning (and it won several E3 awards for its graphics). It also had a number of very interesting features. For example, you can collect up to 8 minions of different classes (and some creatures of myth) to be in your party. This enables you and 5 friends to do epic raid level encounters without needing a huge guild. They also plan to go live with "housing" which is basically a personal Camp where you can have NPCs to repair armor and a bank to store things etc.. and they plan to add in Guild camps as well.

What I found most interesting in all of the dinners and demos and talking about GnH with Perpetual was that it didnt matter who you talked to about the game (whether it was the lead developer, a low level developer, the owners of the company, the community team or anyone else) they all knew what seemed like every detail of the game. The entire team was plugged in and fully aware of how things worked and why they worked that way and they could carry on detailed conversations on the different aspects of the game. That was impressive since not every company works that way. I could discuss loot systems or raid content with the founders of the company as easily as I could talk over more business focused topics like player retention and how much to charge. That gave me a very good feeling on how together Perpetual has its act. I definitely hope GnH is a smash hit for them as they are clearly investing alot of heart and soul into the game.

While there I also had time to explore the madness that is E3. Its a giant circus, with thousands of people running this way and that, often focusing in on who has the flashiest sign or who is giving out the free TShirts. It really is a site to see and experience as the pictures on the net really dont do it justice.

While there I was able to setup a number of meetings with developers that we have built friendships with over the years and see their games and talk to them about ideas for the future of gaming. E3 was a great time and Im grateful to Perpetual for the opportunity to go.