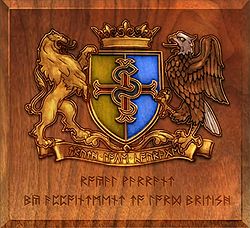 Late spring of 2015 was a busy time for The Syndicate in Shroud of the Avatar. First, we were awarded the Royal Warrant award from Lord British (Richard Garriott), Darkstarr (Starr Long) and Chris Spears. The award was in recognition for the massive amount of testing and feedback The Syndicate had been providing, very quietly behind the scenes. For some groups, chest thumping and ego boosting are important things to do. I say important because they improve the morale of the team and help draw in new recruits. However, when you are a 19 year old guild, with many hundreds of members, almost no turnover, multiple guinness world records, multiple trademarks, contracts for hire, multiple corporate entities, a huge annual convention, sponsorships and regularly host events to raise money for charity then chest thumping and ego boosting inside a game and on its forums are not necessary. We receive more than 4,000 applications to join each year and reject nearly all of them. So we do work very quietly with developers and gaming hardware manufacturers these days. We certainly share (some of...) our stories on this website but there is no need for chest thumping during an awards ceremony or to fill a games forums with tales of our deeds.

That said, it was very rewarding to see the effort put in to support SOTA was recognized and getting an award from those three legendary figures was very much appreciated by the team. Hundreds of people have spent thousands of hours testing the game; writing reports; working out how to replicate issues so they could be fixed and generally working very hard to do a small part to make SOTA a better game for everyone.

In addition to the award, The Syndicate has established its legendary city of Arx Draconis in SOTA. We purchased a Metropolis (the $5,000 largest sized city offered) and completely filled it with Syndicate member houses. Additional towns and villages needed to be purchased to support the massive Syndicate army that settled in SOTA. Port Arx Draconis was the first of those, serving as the gateway to get to the island city. The Syndicate is very proud of our support for SOTA, having contributed more than 1% of its total funding despite making up only a fraction of 1% of its total population. Syndicate members have given heavily (in both money and by investing their time) to creating a vibrant world for all players. Arx Draconis is our manifestation of our presence within the game and is where we host player events (like Craftsman Day, which we started in Ultima Online and that was eventually copied by many guilds across many servers and has even been copied in SOTA already by a guild migrating from UO) and meet possible new recruits.

And finally, at this point in our history, several non-member groups approached us about confusion over some of our history. So in an effort to clear that up here are some thoughts... There is a very passionate group in SOTA known as PAX Lair. We have a good deal of respect for them because they are a dedicated role playing community that hosts fun events (like a maze they recreated throughout the testing phases of SOTA) for players to participate in. Since The Syndicate hosts many player events we understand the challenges with making those successful and thus respect the effort Pax Lair has put in. While not a guild in the traditional sense (i.e. many of their members are in other groups but share an affiliation with Pax Lair to support events), they are a group we believe adds value to the gaming community and therefore is one we respect.

What is disheartening to see is when their wiki/website (and some forum posts) makes claims that are not entirely accurate that we wanted to clear up. Throughout the development phase of SOTA, Pax Lair has claimed a couple of things. At times, they claimed to be the oldest guild around but pointed out they were established a full 2 years after The Syndicate. Thus, that cannot be true. They also have claimed to run the oldest town in Ultima Online. Since The Syndicate placed the very first house in all of UO (and still owns that house today) and began the very first town around that house, that claim is also not accurate. Pax Lair did run a town. It was very successful. It was a benefit to the UO community. And they deserve kudos for that. But to be clear, The Syndicate established the first UO town (known as Arx Draconis) and continues to operate that town today and run player events (like Craftsman Day) from that town every Sunday. And The Syndicate holds the Guinness World Record for the longest, continuously operating, gaming community.