2009 Syndicate World Conference
When we first started planning our 2009 conference (dubbed SyndCon for short) there was a major economic recession going on in the world. We reached a deal with the hotel that we had to commit to having 90 roomnights booked total over the 5 days else we'd have to pay for the rooms. Past years results blew that total out of the water several times over but this year was different. How would the economy affect things? When the dust settled and SyndCon 09 was underway, more than 320 roomnights had been booked. 2009 turned out to be our largest and most successful conference so far. More than 170 people attended the event including Syndicate members and a number of special guests. Among the guests were:
John Smedley and Nathan Pearce of SOE,
Richard Garriott,
Curt Schilling and Bill Mrochek of 38 Studios,
Arthur Lewis of Alienware,
Dell,
Microsoft,
KingsIsle,
Prima Games,
Playxpert,
Bioware,
Heatwave,
G4TV's MMO Report,
Ten Ton Hammer,
Pure West/Second Skin
and the documentary film crew from Beef & Pie

You can view some of the videos that came from the conference over at the ARTICLES section of LLTS.ORG. Suffice to say it was an amazing year. We had an amazing time with some amazing guests and built some strong relationships as a result of this year's event. Alienware sponsored a LAN party with donated machines. Prima Games and Playxpert held round tables to explore what players wanted from their products. Heatwave, KingsIsle and SOE all opened their doors to us for Studio Tours. There were product demos, play testing and feedback sessions of unseen (as of that time) products, contests and several closed door meetings not to mention our annual Charity Raffle which was an amazing success.

Richard added a blurb to his Facebook page after his speech with his thoughts:

The SOE DCUO team added some blurbs to their Facebook page: 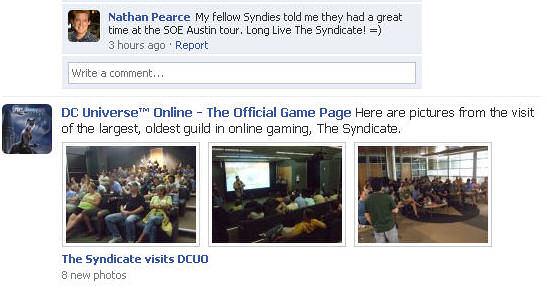 The 2009 Syndicate World Conference was our largest and most successful event to date. Thanks to all of our guests and members who attended. See you in 2010!